El Algarrobico, everybodies favourite hotel on the beach in Carboneras, disappeared under 1800o m2 of green netting as Greenpeace yet again called for the expropiation and demolition of this half built hotel on the beach. 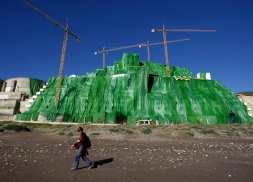 Some 60 Greenpeace volunteers turned up to help out, and were quickly surrounded by a “large” number of police and Guardia units after the Azata del Sol (the owners of the hotel) watchmen called for help, but were permitted to finish off their protest peacefully.

This is the forth major “attack” on the hotel by Greenpeace, who are determined to keep this hotel (allegedly illegal, built without permits on the beach) in the forefront of the public mind and not allow the Government to quietly open the hotel.

In related news, an official Government legal analysis of the “El Algarrobico” situation advised the central government against expropiation of the hotel until the legal path had been exhausted. Or the hotel legalised and opened, of course.