You may have heard that a number of businesses have started accepting pesetas in their shops, the idea being to attract those customers who have a bunch of the old coinage still stashed away but not enough to make the trip to Madrid to change it for Euros.

The idea seemed to start with a bar in Zaragoza, and was quickly taken up by a number of shops across the land, cumulating with the Almeria City Centre Shopping Centre agreeing between all of its members to accept the old pesetas in their shops just before Christmas – they would then pool the money and take it to Madrid in a lump sum. 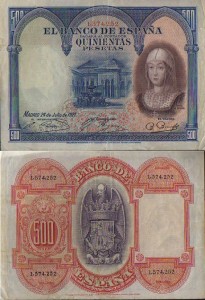 However, during the civil war, as boundaries shifted and the government collapsed, the “official” currency of Spain became worthless. So, local town halls or Revolutionary groups would create local treasuries (usually by confiscating all the gold and silver in town and putting it in a basement) and issue their own notes or bonds.

I’ve always had an interest in these notes, as during the civil war local town halls started to print their own notes, with their local crests on them, back by the town treasuries. Locally, I know that Almeria, Berja, Mojacar and Bedar all printed them, and I have a few lying around. Here’s an example of one from Almeria, supposedly backed by the State: 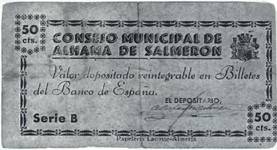 And here’s a bond from the other side, probably backed by the local treasury and with a promise to pay in pesetas once the situation stablised (note that this is by a “Colectividad”, not a town hall, so it’s Franco backed): 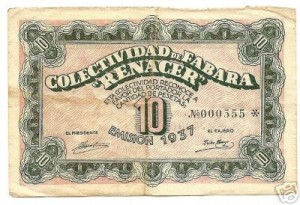 Of course, these bonds are worthless nowadays, as they aren’t backed by anything and all the ones issued by the loosing side were dumped anyway. But, in theory, the pesetas are still exchangeable for Euros if you get enough of them to warrant a trip to the Banco de España in Madrid. So the Almeria city centre shopping association has started a scheme whereby you take your notes in, get a chit for them, and they send all of them up to Madrid for the Banco de España to verify. If your notes are worth anything, they give you a voucher to spend in their shops, if not you get your notes back.

A wonderful idea, and in case you’re sniffing about it, so far they’ve collected over 200,000pts worth of notes (in theory, worth around €1200).