La Cabaña is the original Argentine on Mojacar Playa. Late last year they were evicted from their original premises (opposite Tito’s) by a landlord who tried to triple their rent. Once they had gone, he reopened the premises keeping almost everything identical.

This little scam didn’t work too well, as not only did all the regulars quickly catch on to what happened, but they managed to get new (larger and better) premises only 100m down the road.

Now, we decided to look for a restaurant on Monday 5th, at about 2030ish. So we left, expecting Mojacar to be dead. Instead, almost everything was open, although nowhere seemed busy.

When we got there, we seemed the be the first people in, followed shortly afterwards by a table of 4.  Their new premises are spacious, comfortable, clean and modern. I liked it. 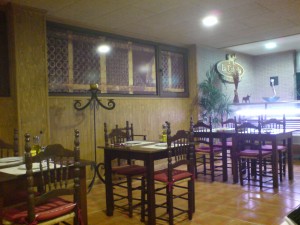 The menu is the same as before. Here’s a slightly skewed photo. 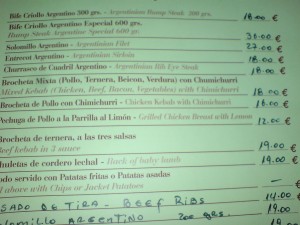 As you can see, the most expensive steak is €38. Which seems high. Are they shipping this stuff in first class? We ignored this, and went for a combined mixed salad, plus a ribeye (Churrasco de Cuadril Argentino) and Solomillo Argentino (200 grms, the GF ain’t big enough for the big one -the big one, by the way, costs €27).

The salad came, and it was very nice. But still, just a salad. €9, I have just spotted while looking at the bill to write this, which seems high for some lettuce, tomato, sweetcorn, palm heart and one bit of asparagus.

Out came the main courses. The ribeye was all right. Not amazing, but Churrasco rarely is. Tasty enough. Delicious jacket potato, with some garlic butter dribbled in it. The Solomillo Argentino was off, and as soon as the owner sniffed it is was back in the kitchen. Very good service there, can’t complain, changed it at once. However, the second one wasn’t a lot better. Cooked nicely over their open barbecue fire, cooked to perfection in fact, just wasn’t amazing. The owner confirmed that it’s shipped in vacuum packed.

I had a cortado and a glass of Orujo (Hierbas).

Now, apart from the bad Churrasco, I can’t complain. Lovely place. Wonderful service. But, for the above plus a couple of beers and a water, the bill came to €55,90.

€55,90? For two steaks, salad coffee + liqueur and two beers? No wonder we’ve lost the tourists. Nobody is going to come to Mojacar for an average steak and pay €30 a head for it. But, and this is amazing when you think about it, it’s not an expensive restaurant for the Playa.