Cayo Lara has been voted into the position of the new leader of the United Left party (Izquierda Unida). 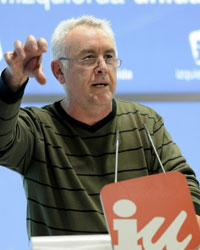 The I.U. is the slightly ineffectual left wing coalition party that encompasses such parties as The Green Party, The Spanish Communist Party and other bearded nutters. It doesn’t have a huge amount of support from the unions, as they prefer the moderate progressive backhanders of the PSOE and view reformers with some suspicion. Far too radical and earnest to be big players.

The trouble with the I.U. has always been the communists. They are -or were- bright enough to realise that the best policy was to keep their heads below the parapets, but with the recent election problems -the head of I.U., Gaspar Llamanzes resigned after the last elections, but it’s taken until now to vote in a new one- seem to be carrying out a coup d’etat in the coalition. Which is probably going to annoy Los Verdes and the rest of them. The fact that Gaspar publically said a few days before the last election that “PSOE is the only natural ally for the IU” was considered by many to be a nail in the coffin, as this translated to “may as well vote for PSOE, then”.

Spain needs a decent left wing party to take over from PSOE, especially in Andalucia. I.U. ain’t it, but its succesor may be, if they suceed in kicking out the Communists.