The riots in La Mojonera, a small village just 10km above Roquetas del Mar (where exactly three months ago Spain was gripped by running street riots between groups of African immigrants and Gitanos) seem to have fizzled out as groups of riot police still patrol the streets.

It ignited two nights ago when a young man (24) from Mali called Sega S. caught three Morrocon men trying to pickpocket his wallet. He and some friends gave chase, and in the scuffle that ensued he received a stab wound to the chest that killed him before the ambulance could arrive.

Shortly after this, a group of his friends turned up at Morroccon owned businesses and started to throw things at the shops. By the time local police arrived, a full scale riot was brewing, and police hung back until anti-riot units of the Guardia Civil (USECIC – Unidad de Seguridad Cuidadana) turned up from Almería, supported by firemen with water cannon and a helicopter. Fights ensued throughout the night, leaving several cars burnt in the street, many broken windows and generally trashed streets. 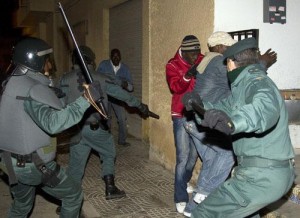 The next morning riot police continued to patrol the streets until the evening, when violence again erupted at around 8pm when some 50 or 60 masked “Subsaharians” rampaged into the village again burning anything they could and attacking Morroccon owned businesses. Running battles with UNISEC patrols continued until around 2,30 according to reports, when the rain finally put an end to things. 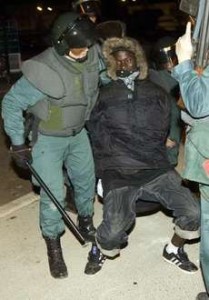 The alleged murderer and his two friends were arrested yesterday, along with some 8 or 10 more for breaches of the peace. While this afternoon only a few fist fights have been reported, full Guardia Civil units still patrol the areas, and local community leaders continue to try to mediate between the -mainly unemployed, and many illegally in Spain – youths. Journalists today, asking questions in between the greenhouses, find that many if not most of the Africans they come across cannot speak Spanish, and most will run as soon as they see unknown white faces in case they are police.

Meanwhile, an excited young Spaniard has become the poster boy for Spain when he recounted how he walked round a corner on his way home and found himself facing 50 masked morenos carrying torches and trashing the street. “I ran like a bee out of there” he said proudly, and Spain -and it’s commentators- are nodding wisely and asking just how much longer this pressure can continue before something goes badly awry. Nobody even knows just how many African illegal immigrants there are in the area, and with people already fighting to get a job at €3.50 an hour picking olives, just what spark will it take to light a full size racial bonfire? The Guardia suspect what’s coming – they’re stepping up anti-riot and crowd control exercises for their units in the area.

Of course, this weekend it’s the 5th Fair of Commerce & Food (Feria de muestras del comercio y la hosteleria de La Mojonera) so I expect the authorities will have tidied the place up a bit by then.

One Reply to “All quiet in La Mojonera… for now?”