Mandala is the old Pascha disco on Mojacar Playa, just before Playa El Cantal. It was brought last year by a company from Aguadulce that own a few discos, and they spent quite a bit of money doing it up. I usually don’t believe people when they say a million euros (it’s an easy figure to trot out), but in this case I can believe it. The interior is fantastic.

We’d been there a few times for drinks. There’s usually a cover charge. But we’d never been to the Restaurant there, despite perusing the menu a few times. So, last night, we went.

As I say, it’s an amazing place inside. The PR guy says that its “based on the whole concept of Miami discos with a unique Asian twist, etc etc.”. Ignoring all this nonsense, I can say that it has around 5 bars inside, plus a restaurant and a beach club. No photos as with the lighting it doesn’t come out, but it does have an Asian (Thai mainly) feel to it, and the best chandeliers in Almeria Levante. (Actually, just found a lovely photo gallery of it here). 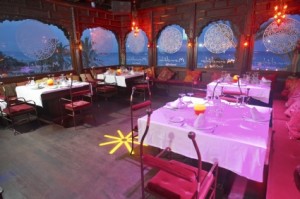 They open the beachclub at midday until 5, and it’s worth popping in for a coffee or cocktail. They then close until 8 and re-open as a House Club until 6am.

Anyway, the restaurant. The menu is divided into two, lunchtime and evening. The lunchtime features an “Executive” menu del dia for 30€ (yes, that’s p.p.) or a normal menu del dia for €15. The evening is full a la carte. Attentive service. Those chairs you can see in the pictura are as uncomfortable as they appear.

Menu is Asian style, tries to be cleverer than it really is. The English translations are a hoot – i.e., what the devil is “Beef of Deer”? I had the Vegetable Tempura with soy sauce to start with. Nice, but the batter was a bit heavy for vegetables, more suitable for fish. The GF has the sushi, which seemed to have been frozen. Hard chunks of rice. It was sent back, and everybody was very apologetic – not a quibble. So unlike the last place I ate in, where we also had a bad plate of food and returned it uneaten, yet got charged half the cost.

I followed with a Tataki of red tunafish with wasabi, despite the fact I normally don’t eat tuna out of season. It was delicious and tasty. The GF had a Caesar salad, which was scrumptious. Obviously, since the GF was driving, she didn’t have wine, so I had a couple of glasses of white. It was an Antonio Barbadillo, which ain’t bad for a house wine of dry white. Mind you, they were €3 a glass. I shall stick to the Gordons & Schweppes, which are only €5.50.

To finish up, we had a Tatin of Yougurt and berries, and a Mojito Sorbete. Both slipped down well. The Sorbete I have filed away for the summer, it could be a dangerous favourite of mine.

They also have a decent meat section, beef on the stone, steaks, etc, as well as more fish and somewhat more exotic dishes. It’s not a Thai restaurant by any means – more EuroAsian international menu. But it’s good, although it could be better, the service is professional and attentive, and if you like an unusal restaurant (albeit with a bit of house drum beat music in the background – hey, it is a Beach House Club) it’s worth a trip. Cost €64,80 for 2 with drinks. Plus, it seems you get some free drinks in the club afterwards, and access to the VIP suite. Not Bad.

Check out their decent website here. They also have a full copy of their menu online.