Asuntxu is a fun little place on Mojacar Playa with tapas and a twist – you serve your own beer from the taps installed in the centre of the tables.

It’s actually good fun, just choose a table, get it switched on and off you go, pulling your own beers. Drink as little or as much as you want to, and get charged by the centilitre. €5 for a litre, which isn’t much more than you would pay buying it by the glass over the counter (assuming, say, €1,50 for a 33cl.). The beer’s “Cruzcampo”, but Heinekein is available behind the bar. Plus lots of wines, spirits, etc.

The amount pulled per table is shown on the screens dotted around, so you can keep an eye on the amount consumed and the price incurred. And if your neighbour goes to the toilet, well, if you’re quick you can have a crafty glass off his pump. 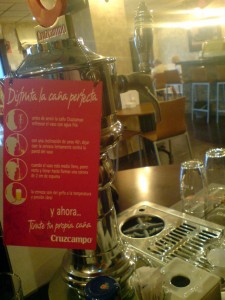 They also, and I’m not sure how legal this is, have a leaderboard. So you can see who’s drinking the most, in the least amount of time. And if you get into the top 5, you can assign your name to the leaderboard and see if you get knocked off. Great fun!

Tapas are plentiful, but despite the fact it says “restaurant” outside it’s really tapas and raciones. They looked good, and the kitchen seemed busy the night we were there.

It’s run by a couple from Garrucha; she’s petite, busy and charming and he’s a large chap with a scowl. He’s not allowed out from behind the bar, probably because he’s a walking advert for the dangers of beer drinking.

More info on the AutoPull system