I’m a contrary sort of fellow at times. For example, I often fancy going out for a spot of dinner of Tuesdays. Tuesday is the day most restaurants seem to be closed.

We set out to Osteria, the Italian restaurant between Mojacar pueblo and playa, a particular favourite of mine. ‘Twas closed. For no particular reason we headed up to Mojacar Pueblo, parked and wheezed our way up the hill.

It was a lovely autumn evening, and we spent a happy while wandering around the Pueblo. Eventually, we ended up outside Restaurant El Antler. This was open, but full. Crammed would be the mot jus. So we continued along to Restaurant La Taberna, “el bar en el arco de Mojacar”.

La Taberna is a Mojacar restaurant that I’ve only ever had a few drinks and tapas in, but have always wanted to dine at. It’s located in the middle of Mojacar pueblo, in the Plaza del Cano, under the old arch. It has a small bar and seating area in the front, or if you go down a little corridor behind the bar you pass the kitchen, toilets, a little cave with a vitrina and a table in it and come out in the main restaurant area, which is a lovely room on three levels. Small and intimate. 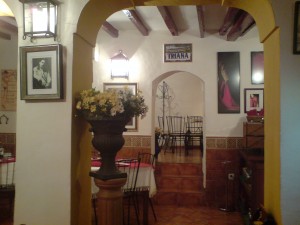 The whole place is wonderfully decorated, and the photos do not do it justice. Decorated in an antique cortijo style, whitewashed, rustic beams, neat little tables, a bulls head on the wall and a lot of old bottles, cans etc. 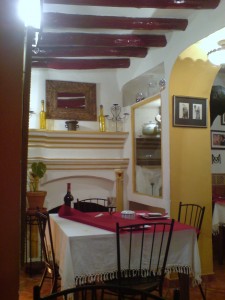 The menu looks good, being more of a collection of dishes for sharing rather than a traditional menu. So while there are a couple of large meat and fish dishes on the menu, most of the dishes are smaller €6 – €10 dishes, with smaller tapas for €1.50 –  €4.50. You can eat them either in the restaurant or over drinks in the main bar.

They also have a very nice national wine menu.

We selected a bottle of Villarica, and a selection of dishes. A salad, stewed quails in a lemon sauce, mushrooms stuffed with eels, chicken wings, and sauteed mushrooms with jamon serrano.

The salad was delicious. 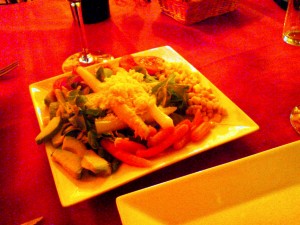 The quails were nice, but not quite as decent as they should have been. The mushrooms with baby eels (gulos) most pleasent. The chicken wings were, while frozen, fresh before going into the freezer (whole chicken wings, not precooked things). The sauteed mushrooms had been cooked with burnt olive oil and were inedible. These were sent back, and we were offered a 50% discount which frankly I felt added insult to injury.

As to why we ordered so many mushrooms, the only explanation I can give is that they are in season so should be fresh and rich.

They don’t serve coffee. The waitress didn’t know why. They do have a decent Orujo, which helped.

The setting and decoration is wonderful. The location is a pain as you have to walk miles to get there, and getting out is uphill. The food is not as good as it should be. I get the feeling that the owners aren’t paying attention, and the kitchen is just bunging the stuff out without too much interest. It’s all right when it should be wonderful. And it just isn’t, but it charges as if it were.

Total bill was €58,75. I think I’ll go back to just frequenting it for tapas and wine.

On a different note, we tried to stop for a drink on the way out of the village, but everywhere was closed. And we want to attract tourists in the off season? 23:00 and Mojacar pueblo is dead.

Restaurant La Taberna Mojacar Pueblo
Plaza del Cano 1,
Mojacar Pueblo
647 724 367
From the Mojacar Pueblo mirador walk down the street behind “Angelas” (currently a charred shell…), turn right, then left down the hill to the square and through the big arch.