The Junta de Andalucia has announced that it is to spend 162 thousand euros restoring the ancient Torre de Pirulico, the famous ruined watchtower that stands guard over Macenas beach, and is inviting tenders for the contract. 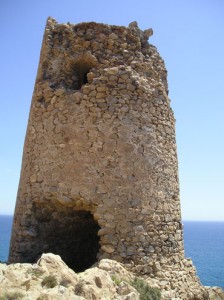 The tower is believed to have been constructed by the Moors between the 12th and 14th centuries and it was an important part of coastal defenses during the 15th and 16th centures as part of the network that guarded against pirate raids along these coasts.

The tower is to be rebuilt using the same source materials as in the original, wherever possible locating and reusing the fallen stones scattered around it; the interior staircase to the top platform is also to be rebuilt using original materials, and a walkway built to the car park. The general idea is to make it safe for visitors then use it as a mirador for tourists in the area.