August has been a busy month for me. A trip to Galicia, and the resulting death threats from the 16 year olds with a Galician (Galizian?) grandfather from Manchester and Birmingham. Lots of traffic, lots of work, lots of play and not much time to go out and enjoy a decent meal. Not that you can really get one in August, anyway. Plus the fear that one of the 16 years old may have been working in one of Mojacars pubs and would spit in my food.

So that’s why I’ve only posted a few news comments and articles the last month. But hey, back to Los Pastores, Cortijo Cabrera, Turre.

Restaurant Los Pastores, Cabrera, is a nice easy drive up from Turre to Cabrera, and gives the old Mazda a chance to try out its 260bhp and 4 wheel drive. Coming down is another matter.

Restaurant Los Pastores is in the middle of Cabrera, and has some of the best views in the Levante. Seriously. It’s worth going up just for the views. Sit out on the terrace (you may have to book) and just look at the views. And if you’re driving home take your binoculars and look for police controls on the route home.

Don’t worry about getting lost, there are a lot of little signs stuck in the side of the road directing you to its door. Parking is ample.

When we got there, although we had booked, they had given our table on the terrace to somebody else, which was annoying. So we sat inside. In a small room next to the kitchen. Views weren’t much although they had a fantastic oak trunk as part of the ceiling. 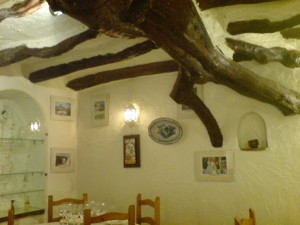 And we could hear the Italian maitre’d shouting at the staff, which was fun. They have a larger room in between this room and the courtyard, but that is smoking; and the courtyard was taken over by a huge table with loads of kids. So into the small room we went. We were the only people in that room, but it was close to the bar and the rest of the place was humming.

Service was friendly, but a bit slow. This however I put down to the amount of people eating there that night, as on others times they have always been prompt.

The menu, frankly, isn’t up to the views. It’s nice, but not wonderful. We didn’t have starters, not being overly hungry, but they bring you some crunchy rabbit food, ali oli, and wonderful fresh bread (and then charge you a euro each, which I shall allow them this time as the bread is nice). L had the leg of lamb, which she enjoyed immensely. I had the Magret of Duck, slow roasted. No I didn’t, because after 10 minutes the Italian came back and told us he’d just sold the last one. So I had the Calypso Chicken, which is breast of chicken in a pineapple sauce and lots of fresh roasted peppers and veg over it. The Chicken wasn’t, in my opinion, quite fresh. Tasted as if they’d run out of the fresh stuff and found some at the bottom of the freezer and microwaved it. Nothing wrong with it, just hadn’t been brought that morning. The veg was wonderful, fresh and crisp. The overall sensation was delightful at the beginning, but had palled by the time I finished it – pineapple tends to be a bit overpowering when you cover the plate in it. 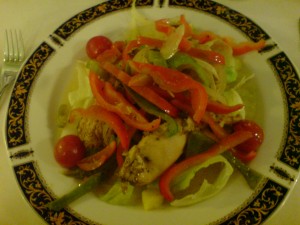 They do a nice line in Pizzas, and have a proper pizza oven. I’m told they’re very nice. They also do a number of types of steaks & meats, and some fresh pasta, along with the usual stuff. Desserts are good, mainly homemade.

The main fly in the ointment was when I ordered a glass of wine. Opened at the table, it was corked. Tasted like vinegar. I sent it back, only for the Italian to pop up a minute later to sniffly inform me that there was nothing wrong with it. Which surprised me. He did, after I insisted it was off, swop it, but then told me he’d given me a temperanillo as I might like it better then the Merlot he originally served me. Such is life.

We skipped dessert, as the main courses were enormous and by the time we got the waiters attention we had gone past the eating stage and just fancied the bill.

All in all, it’s worth a trip up. I’ll be honest and say that it’s saved by the views, I don’t think the food is good enough to warrant a 20 minute trip up that road. In fact, I think it should have more of a Spanish feel to the menu, seeing as to how it’s located in an ancient looking cortijo. It should be nice in the winter, too, as it has some wood fires and pleasant décor inside. But for a relaxing meal in a nice environment, it’s worth a trip. And it’s reasonably priced, so it won’t break the bank.