Throughout history, societies have attempted to install awe and fear into their common citizens by creating imposing edifices within which to dispense justice.

This theory appears to have fallen by the wayside with the new courts in Vera. 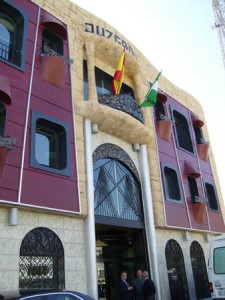 Even the government seems unable to muster much enthusiasm about the building, the official press release is quiet on the subject of the facade, simply muttering about the new improved space and the modern office with all mod cons.

A recent check of the front revealed that, unlike most office buildings, there is no happy little plaque announcing the name of the architect. No doubt he is either in hiding or committed to an asylum.

In fact, 10 mins on the net doesn’t even reveal who is responsible for this atrocity. Just a bunch of local residents complaining about the eyesore in their street. Can’t even find out how much it cost.

But what really gets me is that the expansion next door is in almost the same design. Only they changed it slightly so that you don’t confuse the two buildings. So instead of one large building, ugly as sin, we have two jarring eyesores that, frankly, are so ugly they will cause accidents as people stare openmouthed at them as they drive past for the first time.

Who comes up with these things? More importantly, how dare they spend our money on this crap?