ZP, better known as the President of Spain, announced (for some reason during a press q&a session with the President of Mexico, who looked a bit bewildered) that he was “cracking down” on the strikers, and said that Spain was almost back to normal. “Zero tolerance towards the strikers” is now the offical line from Madrid, and this was backed up as one striker was sentenced to 8 months in jail for rebelling against authority.

Three more lorries were burnt in Barcelona, and the lorry driver who was seriously burnt in his cab the other day said that “he’d hunt down” the chap who set his lorry alight and then he’d “better watch out”. Seems to be feeling better then. His wife, not to be left out, called the arsonist a “terrorist”. Meanwhile, ZP said that “burning lorries is not the solution”, an intelligent observation I would say. He also repeated his refusal to implement a minimum tariff on road transportation. 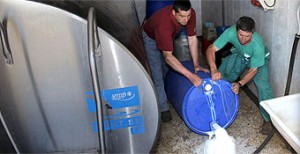 Meanwhile, millions of litres of milk are being wasted a day as there is nobody to pick it up, 1,5 million litres daily just in Andalucia according to COAG, which is costing Spanish farmers a million euros a day. Antonio Rodriguez, a spokesman for COAG, said that small dairy farmers were “In water up to their necks”. What I want to know is, what happens to the sewer farms when that much milk hit’s the processing plants?

The Government has moved to reassure us all repeating it’s claim that it is normalising food deliveries “irrespective of the strike”. In fact, an underling went so far as to call the situation “optimistic”. Tell that to SEAT, who gave 8000 workers the day off becuase there are no parts in their factory.